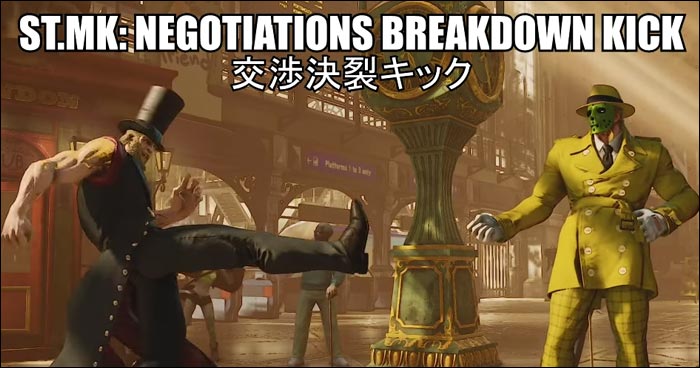 Most everyone by now probably knows the names of almost every special move in Street Fighter 5: Champion Edition considering the characters say the lines themselves in battle like the Sonic Boom, but there’s hundreds more the vast majority of players probably don’t even know about.

Capcom gave every normal attack in SF5 its own unique name which is only included with the Japanese frame data for characters, and HiFight recently took on the mission to translate them all into English via video guides for Ryu, Chun-Li, M. Bison, G, Guile, Gill and more of the cast.

Unsurprisingly, G has some of the most entertaining move names around like the ‘Please Wait Chop’ for crouching light punch and his ‘The World Goes Round’ jumping heavy kick which really gives off a sense of the president’s persona and weird charm.

Akuma, on the other hand, is really trying to do some serious damage with his strikes considering even his light punch is called ‘Face Breaker.’ The demon’s annoyingly strong medium kick is also aptly and painfully called ‘Guts Crushing.’

There’s also references to other characters hidden in some of the titles. Chun-Li’s sweep is called Gen’s Assassin Kick for the original Street Fighter character while Gill’s fiery fierce is dubbed Pyron Hammer Knuckle — which is extra fitting since the SF3 boss has a Darkstalkers crossover costume for the flaming entity.

In his newer videos, HiFight also began challenging himself to perform crazy and often impossible combos with each character he showcases to add a little more flair to the notation and attack names.

You can check out his guides below for G, Nash, Guile, M. Bison, Chun-Li, Ryu, Ken, Akuma and Kage.