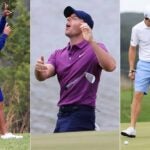 Tiger Woods got to show off his newest course design on Tuesday.

They played a mix of best ball, alternate shot and singles matches, and it all culminated on the spectacular island green par-3 19th bonus hole, which is an absolute stunner. Woods and Thomas won, but this was for charity — the Payne Stewart Family Foundation — and to unveil Woods’ first public design, so the wins and losses aren’t important here. But it was still a pretty fun match that showcased a breathtaking golf course and produced a handful of memorable moments. Players talked trash. They talked course strategy. They talked equipment. They even talked Domino’s. Here are our favorite moments that went down at Big Cedar Lodge.

Rory McIlroy is a BIG fan of Domino’s pizza

His go-to order? Deluxe with extra sausage. He breaks it down for Thomas here. It’s weirdly fascinating.

Woods’ drive went way left on the 1st hole, and the golfers noticed one of the few people on the grounds searching for it.

“So far left of that,” Woods joked, referring to where the person was looking. That led to Thomas bringing up everyone’s favorite basketball legend-turned golfer, Michael Jordan.

“Like playing with MJ out here,” Thomas said, before mimicking the GOAT. “Be like, ‘Oh I got it, it’s right here. [The group laughs.] ‘Oh Tiger it kicked out to the fairway.’”

Added McIlroy: “If you are not cheating, you aren’t trying.”

“Bear’s Club a little easier to get away with it than The Grove,” Thomas said. “Grove you can see everything.”

We won’t elaborate on this one, but MJ might want to have a word with JT the next time they have a tee time.

Tiger Woods was not helping his partner

Thomas missed the green on the par-3 2nd hole and was looking for an assist from his partner/course designer for this second shot … but Woods wasn’t much help.

Big Cedar Lodge isn’t just dynamite golf. It has hunting, fishing and so much more. There’s lots of wildlife in the area, and you can bet it’s included in the resort’s decor. Some of that actually terrified Thomas, though. He said his cabin has two rooms, one of which had “a huge raccoon” on the wall. “If I woke up in the middle of the night I’d be terrified,” he told the group walking off one of the tee boxes.

Rose could relate. He said he’s staying in “the Tiger Woods cabin.”

“Mine was worse though,” Rose said. “I had pictures of Tiger above my head.”

One of the most interesting moments, actually, was when Woods asked Rose a question about shafts. They went deep on the topic.

McIlroy had no respect for Woods’ greens (kind of)

McIlroy left himself a long putt on the par-5 4th hole, but no one told him this was just an exhibition. He decided to take a wedge — as some pros often do — and pitch the ball close. On Tiger’s new pristine course? The nerve!

“You are that guy,” said Thomas.

“I am,” McIlroy said, smiling.

“We got four people out here and you are going to take a dang divot out here?” Thomas said.

McIlroy, however, pitched it clean — no divot! — and close to the hole, getting his next putt conceded and helping his team win the hole.

‘You hate to see that’

Sensing a theme? Thomas was the MVP, folks. He was good/funny/witty/etc. Here’s him telling Rory “You hate to see that,” after McIlroy lipped out a putt. “Good try.”

Woods’ putt on the 7th hole (the first of alternate shot) wasn’t, well, close at all. It didn’t break and missed about a foot out to the right and rolled a good seven feet passed the hole. Woods, dumbfounded, sarcastically muttered “Good read” to himself. Thomas, his partner, razzed him too.

“Unlucky there, partner,” Thomas said. “Wasn’t too bad besides the pace and the line.”

These two play together a lot, in practice rounds at home, on Tour and in other team events. So maybe Thomas is comfortable enough with their friendship where he can call Woods “Dum-Dum” for having his name on the side of his golf ball.

The Golden Bear and The Black Knight still got it

Playing the par-3 19th bonus hole, Jack Nicklaus and Gary Player joined the action. Nicklaus, at 80 years old, found the middle of the green, and Player, 84, tucked it into the back-left corner. No problem. These guys don’t slow down. Both legends rolled their birdie putts close and made par.

Berhow is the managing editor at GOLF.com, the site’s primary homepage editor and the edit team’s on-site lead during major-tournament weeks. He plans the site’s daily coverage, marquee story placement and long-term content rollout for magazine pieces and special projects. He writes for both the website and magazine, edits and assigns stories. Berhow also contributes to podcasts and appears on camera for a variety of digital programming. The Minnesota native attended Minnesota State in Mankato.