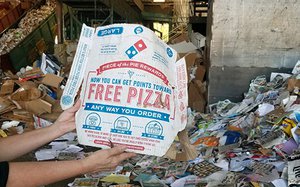 Domino’s wants to talk trash. Well aware
that Americans are increasingly horrified at the takeout containers filling up trash bins — and the mountains of garbage piling up on city streets — the pizza giant is introducing local details on
pizza-box recycling.

I hope it helps, since garbage guilt seems to be a growing part of the COVID consciousness. Residential trash is up some 25% since the pandemic began, and no one feels good about it. Washington
Post food critic Tom Sietsema recently saved all his takeout trash for three weeks, and the visuals have been
keeping me up at night.

Pizza boxes are made from corrugated cardboard, which is recyclable — at least technically. (And for the record, they are also compostable.) And according to WestRock,
one of Domino’s packaging partners, about 73% of the U.S. population has access to recycling programs that take the boxes.

But, like so many other things in 2020, recycling in
America is kind of a train wreck. Not only are many cities slashing and eliminating programs, many people believe that because pizza grease gets on the boxes, they can’t be recycled.

“We have
heard a lot of excitement from customers about pizza boxes being recyclable,” the company says in its announcement. “However, sometimes they were confused about their local regulations. We are also
happy to see communities nationwide communicating more clearly to residents that they do want pizza boxes in their recycling bins, instead of the garbage cans.”

Domino’s says it is working to
help municipalities be more explicit in recycling guidelines. And back in July, it released results from a study by WestRock, evaluating typical amounts of grease and cheese left in pizza boxes.

The study, reviewed and endorsed by other companies, concluded that grease and cheese remnants don’t impact recycled fibers’ quality.

Earlier this year, Domino’s increases the
recycled content in its pizza boxes from 40% to 72%.