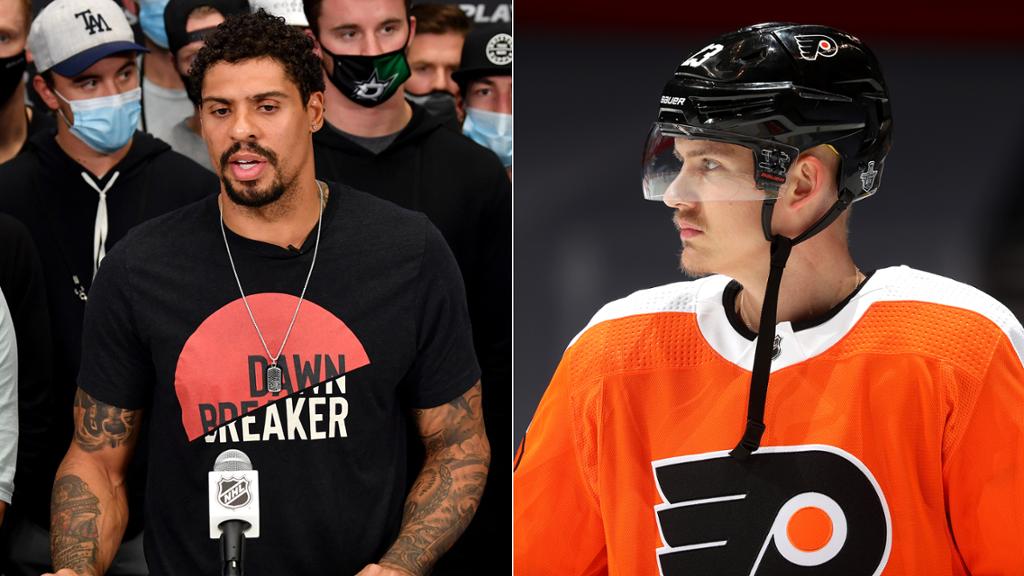 The first day of August was a historic one in the NHL. Not only was hockey back for the first time since March 11, with five playoff games being played in Toronto and Edmonton, but Matt Dumba of the Minnesota Wild put himself front and center in the fight against racism. Before the Chicago Blackhawks played the Edmonton Oilers at Rogers Place in Edmonton, the defenseman knelt during the United States national anthem after vowing that the NHL and the Hockey Diversity Alliance will stand for justice and against racism. While he spoke at center ice, Oilers and Blackhawks players surrounded Dumba in a circle. When the American anthem was played, Dumba, who is Filipino-Canadian, dropped to one knee while Blackhawks goalie Malcolm Subban and Oilers defenseman Darnell Nurse, each of whom is a Black Canadian, stood beside him with a hand on Dumba’s shoulder. It was a memorable, and important, start to the postseason. — Bill Price, Editor-in-Chief

Video: Matt Dumba on his passionate speech against racism

Every now and then, Connor McDavid produces a snapshot of skill and brilliance like only he can. Such was the case for the Oilers forward in Game 2 of the Stanley Cup Qualifiers against the Blackhawks. Angry and motivated after the Oilers’ 6-4 loss in Game 1, McDavid opened the scoring 19 seconds after the opening face-off, then gave Edmonton a 2-0 lead at 4:05 with a goal for the ages. The captain was in full stride when he swatted a stretch pass from Ryan Nugent-Hopkins out of the air at the Edmonton blue line, hit the accelerator, blew past Chicago defenseman Olli Maatta on his backhand and flipped the puck over goalie Corey Crawford‘s short-side shoulder. McDavid would complete his first NHL postseason hat trick later in the 6-3 victory, but the topic of discussion was his second goal, which I consider to be the most spectacular of the 2020 postseason. — Mike Zeisberger, staff writer

It took one game — albeit a very long one — for the Tampa Bay Lightning to make sure they would not be swept by the Columbus Blue Jackets, like they were in the 2019 Stanley Cup Playoffs after winning the Presidents’ Trophy. In Game 1 of the rematch in the 2020 Eastern Conference First Round, the Lightning were trailing 2-1 when Yanni Gourde scored 23 seconds into the third period to tie the game. It was the last goal for a long time. Forward Brayden Point scored at 10:27 of the fifth OT to give the Lightning a 3-2 win and a 1-0 series lead six hours and 13 minutes after the game began. Andrei Vasilevskiy made 61 saves for the Lightning, Joonas Korpisalo set an NHL record with 85 for the Blue Jackets, and Columbus defenseman Seth Jones set an NHL record by playing 65:06. Perhaps Lightning coach Jon Cooper said it best: “I don’t think anybody can understand how hard it is on a player to go through that and still … be able to make the plays they were making. It was remarkable.” — David Satriano, staff writer

Montreal Canadiens general manager Marc Bergevin was not expected behind an NHL microphone on the afternoon following Game 1 of the Eastern Conference First Round against the Philadelphia Flyers. That he sat grim-faced and disheveled, clearly after a sleepless night, with captain Shea Weber to his right, set off alarm bells. And then Bergevin made the gut-punch announcement that Canadiens coach Claude Julien had been transported hours earlier to St. Michael’s Hospital in Toronto, stricken by chest pains. Julien’s playoffs were over, but he received prompt surgical attention and is on the road to recovery. But Bergevin’s emotional statement made it clear that hockey was, in that moment, the furthest thing on the mind of the Canadiens. Their coach’s health was all that mattered. — Dave Stubbs, columnist

Aug. 18: Reaction to the death of Dale Hawerchuk

Hockey Hall of Fame forward Dale Hawerchuk died from stomach cancer early in the day and the outpouring of affection and sadness from the hockey world that followed the announcement was touching. From inside the Stanley Cup Playoff bubble in Edmonton came a moment that’s going to be etched in my memory for a long time. Dallas Stars coach Rick Bowness appeared on the east bench inside Rogers Place when the arena production crew was checking its video tribute to Hawerchuk that was going to run during Game 5 of the Western Conference First Round between the Stars and Calgary Flames later in the day. Bowness, who briefly played with Hawerchuk with the Winnipeg Jets in 1981-82 and then coached him with the Jets from 1983-89, saw the video screens, then sat on the bench, overcome with emotion from the loss of his friend. It was a powerful moment, testament to the connections Hawerchuk, known as a low-maintenance superstar, made throughout his career and life. — Tim Campbell, staff writer

Aug. 27: The NHL comes together in protest

The visual was striking. Player after player after player filed into a room behind a table, where five players stood at the front together to speak. While Colorado Avalanche centers Nazem Kadri and Pierre-Edouard Bellemare, Vegas Golden Knights forward Ryan Reaves, Stars forward Jason Dickinson and Vancouver Canucks center Bo Horvat took the microphones, the space behind them was filled with players in masks, supporting the decision players across the NHL had arrived at after much discussion: They would not play postseason games Aug. 27 and Aug. 28 in protest of systemic racism and police brutality after a white police officer shot a Black man, Jacob Blake, in Kenosha, Wisconsin. It was a moment of unity and a significant statement, which resulted from talks across teams and conferences, between white players and Black, at a time of peak animosity on the ice. As Reaves said, “I think that’s the most powerful thing that happened today, and now you see us all coming together, all opponents here.” — Amalie Benjamin, staff writer

Michael Hutchinson had to wait a long time to make his first start in the Stanley Cup Playoffs. With Avalanche No. 1 goalie Philipp Grubauer and backup Pavel Francouz each unfit to play, the 30-year-old, in his seventh NHL season, got the call against the Stars in Game 5 of the Western Conference Second Round. Hutchinson made 31 saves in Colorado’s 6-3 win to force a Game 6 and became the 14th goalie in NHL history to make his first playoff start and win when his team was facing elimination. “It’s what you work for when you’re a kid,” Hutchinson said. “You dream about [it] playing in the backyard, playing in the Stanley Cup Final.” — Tracey Myers, staff writer

Philadelphia Flyers forward Oskar Lindblom always believed he would play in the NHL again after he was diagnosed with Ewing’s sarcoma, a form of bone cancer, on Dec. 10. His faith was rewarded when he stepped on the ice for Game 6 of the Eastern Conference Second Round against the New York Islanders nearly nine months after he was diagnosed. Lindblom had three shot attempts, two hits and blocked one shot in 17:30 of ice time, but his impact was much bigger than that for the Flyers in a 5-4 double-overtime victory that forced Game 7. “This kid has so much courage,” Philadelphia captain Claude Giroux said. “He played unbelievable too. … This guy’s heart, you have to see it to believe it.” — Tom Gulitti, staff writer

The best thing about playoff hockey is the unexpected heroes who become part of Stanley Cup lore with unforgettable performances. Enter Stars forward Joel Kiviranta in Game 7 of the Western Conference Second Round against the Avalanche. Kiviranta was inserted into the lineup with forward Andrew Cogliano unfit to play. In his third postseason game, and first of the series, Kiviranta finished a hat trick at 7:24 of overtime to move the Stars into the Western Conference Final. He became the seventh player in NHL history to score a hat trick in a Game 7 and the first rookie to do so. Wayne Gretzky, in 1993, was the last player to do it. Not bad for the undrafted Finland-born player, who had been scratched from 13 of the Stars’ first 15 postseason games. — Shawn P. Roarke, Senior Director of Editorial

Semyon Varlamov usually is reserved and even keeled, at least around the media. That’s why it was an unforgettable moment when the Islanders goalie skated from his crease to center ice and dove into a celebration after forward Jordan Eberle scored at 12:30 of the second overtime in a 2-1 win against the Lightning in Game 5 of the Eastern Conference Final. The win extended New York’s season for another game. “I don’t know, I just jumped because I was so excited for us,” Varlamov said. “Our season was on the line today, this game. When we scored that goal, it was just a lot of emotions going through in that moment. I was just so happy for the guys and so happy for us.” — Brian Compton, deputy managing editor

It was the stuff of goosebumps, of legend. “It was a dream come true,” Lightning center Steven Stamkos said. Injury and illness had cost Stamkos so much in his NHL career. Once again he’d been forced to watch his team play without him, this time in the Stanley Cup Playoffs. After 211 days of waiting, after 60 days of isolation, Stamkos made his return in Game 3 of the Stanley Cup Final. On his third shift he took a pass, eluded a defender, took his first shot, and he scored, snapping the puck from the right circle high into the far side of the net. Though he played two more shifts and had 2:47 of ice time, he had left his mark. He had contributed. “You have to marvel at it,” coach Jon Cooper said. “It’s pretty [darn] cool.” — Nick Cotsonika, columnist