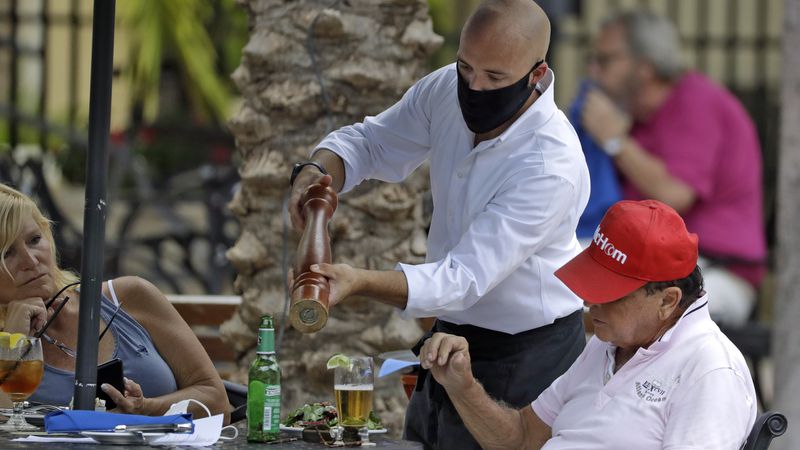 The day after Gov. Ron DeSantis lifted statewide restrictions on restaurants and other businesses, I was on one of my few lunchtime forays inside a dining establishment since the coronavirus hit.

When a man and woman walked in barefaced, a waiter politely reminded them about a local ordinance requiring masks. (Such ordinances remain in place even with the governor’s decision.) The manager provided masks and got them seated — but not before the man uttered the word “sheeple,” presumably meaning us herd-following people who brought our own masks.

Seems there’s not much middle ground in this pandemic.

When it comes to dining out in particular, we appear to largely be in three camps: The no-way-not-me-not-yet group; the cautiously-dipping-a-toe-in-or-at-least-thinking-about-it faction; and those who have been eating out, period.

And just when some Tampa Bay residents may have been taking tentative steps toward dining out again — bolstered by sensible mask-wearing, sanitizing, partition-separating, diner-distancing and restaurants half-full — the rules changed.

Given all this, local restaurateurs had interesting takes on what could come next.

At Skyway Jack’s in St. Petersburg, where they downsized from six cooks to two, owner Joe Tenaglia didn’t see the governor’s move sparking an immediate rush to pack restaurants, particularly in the current slow season.

“I don’t think that businesses are that busy that (customers are) going to have to worry about it,” he said. “Business is not just going to turn around and boom … people are going to be full again.”

Gordon Stevenson, who owns Trip’s Diners in Tampa, St. Petersburg and Seminole, doesn’t see the change altering anyone’s mindset. “If they were already scared, that’s not really going to change. If they weren’t scared, that’s not going to change, either,” he said. In the days just after the governor’s order, his restaurants were at about 50 percent capacity inside, a little more on outside patios.

“Ultimately it comes down to people’s own choices of whether they’re comfortable in crowds or not,” Stevenson said.

And by the way, he knows that mask push-back well, with his frontline staff having on occasion been called ugly names for asking customers to comply.

At the Columbia Restaurant Group, which includes the Columbia, Goody Goody and Ulele, the plan is to keep up precautions: disposable or QR-code menus, single-packet condiments and protocols including that the person who brings your food doesn’t also take dishes away. For now, no traditional tableside preparations of their 1905 salad or sangria, either.

“All the things we were doing before we’re doing now,” said chief marketing officer Michael Kilgore.

But will all restaurants — particularly those hit hardest by what 2020 brought — be judicious about precautions and controlling crowds?

“If you’re at a restaurant and they’ve just packed all the tables together again, you should think about going somewhere else,” said Dr. Michael Teng, virologist and associate professor in the USF Health Morsani College of Medicine. And no, he has not been going to restaurants.

So what can tentative diners do if they have no interest in going shoulder-to-shoulder during a pandemic?

And when outside tables are available, particularly in what passes for fall in Florida, that’s a less confined option. Some restaurants let you pick “outside” on their reservation sites.

And consumers can call ahead and ask questions about a restaurant’s busyness, table-spacing and anything else.

“We encourage that,” said Chris Happel, general manager at the Wine Exchange in Tampa.

Then there’s that dining choice we’ve all come to know so well in 2020: take-out and delivery.

“For those people that don’t want to risk going out,” Stevenson said, “that’s always an option.”